Technical factors predict the progress and results of the Jan Blachowicz vs Dominick Reyes match at UFC 253 on September 27.

After nine years, the UFC Light-Heavyweight UFC saw a new “no Jones, no Cormier” title match In this UFC weight divisions, both of the dominant weight-class punchers retired and returned the title. This is also the time for two emerging boxers – Dominick Reyes and Jan Blachowicz to seize the opportunity to take the throne.

Speed ​​and agility are the most visible strengths in “The Devastator” Dominick Reyes. Especially when promoting the ability to move, Reyes can knockout opponents at any angle with his left hand.

As a 37-year-old senior, being able to climb to the top of the UFC is a feat for someone who has gone through 34 matches in his career like Jan Blachowicz.

However, when looking back on Jan’s matches at Light-Heavyweight, the Polish boxer is no less competitive than the emerging boxers in his standing ability. Even good Boxers like Alexander Gustafsson, at their peak, had to avoid the juggernaut with Jan.

Without lightning speed, in return, Jan Blachowicz’s attacks are very heavy, especially in counter-attack situations. Sometimes, Jan’s “slow” attack helps him attack after the opponent launches an attack, the resonance force when rushing in makes the chance of knockout increasing. 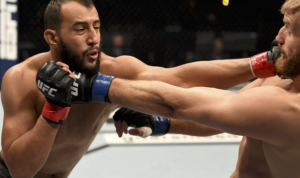 The only recent defeat to Thiago Santos, Jan let himself be knocked out in a careless chase situation. Chasing younger boxers is something he should also avoid if he does not want to give opportunities to the opponent.

Confronted at UFC 253, it is not difficult to see that Dominick Reyes will actively seek to actively attack Jan Blachowicz’s physical damage. The advantage of cutting corners and variety in attacks helps Reyes have more approaches to become one of the winners

Jan Blachowicz’s chances mainly came from unexpected counter-attacks, which Reyes had anticipated. Reyes’ flexible set of measures will be the way to deal with the sledgehammer hands of Polish boxers.

Prediction: Dominick Reyes won KO of the third half.